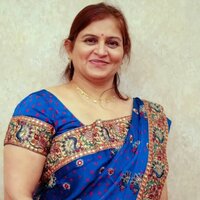 Mamta Pasawala, age 58, known by many as Manini Radhika Devi Dasi, has departed this world on Wednesday April 21, 2021 after a long battle with cancer. She departed on the glorious day of Sri Ram Navami, the Hindu festival which celebrates the appearance day of Lord Rama. She leaves behind her husband, Ashish Pasawala and two daughters, Manasvi Sharma, who got married last year and Anjali Pasawala, who graduates college this year. Mamta was born in Mumbai, India and met Ashish in 1991, after Ashish saw Mamta in his cousin's wedding video, who was Mamta's best friend at the time. After getting married later that year, Ashish and Mamta then moved to the United States in October. Mamta and Ashish recently celebrated their 30th wedding anniversary. Mamta attended Fairleigh Dickinson University to become a paralegal. Mamta worked for Bank of America dedicating over 27 years of service as a personal banker, creating memorable relationships. During her tenure at the bank, she always strived to better peoples lives by preaching spiritualism and spreading Krishna consciousness. Her manager and co-workers describe her as selfless and that she has a memory of an elephant, as she remembers everyone's birthdays, anniversaries, and the date that she meets them. Mamta is a devotee of Lord Krishna who selflessly served the ISKCON community fulfilling her service vow to her Guru Maharaj, His Holiness Bhakti Charu Swami. Even within the local ISKCON community, others referred to her as the "Sachin Tendulkar" and "walking encyclopedia" of the Bhagavad Gita. Her passion for deity worship left an imprint on many families. Mamta had a saying which she always went by - ASAP. For her, it meant "Always Say a Prayer". Mamta is known by many as vibrant, honest, straightforward, full of love and light, and always ready to help others. She was always the first to say yes and volunteer to offer her service. Mamta was, and remains to be the best mother, wife, daughter-in-law, sister, friend, and inspiration and will be terribly missed.