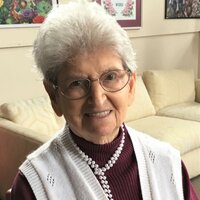 Sister Anita Marcellis, SC, 95, formerly Sister Anita Charles, a Sister of Charity of Saint Elizabeth, died Friday, November 12, 2021 at the Convent of Saint Elizabeth, Convent Station, NJ. Sister Anita was born in Madison, New Jersey, the daughter of Anthony and Mary (Friezo) Marcellis. She entered the Sisters of Charity on October 2, 1949 and was a member for 72 years. Sister Anita graduated from the College of Saint Elizabeth, Convent Station, New Jersey with a B.S. degree in Business Administration and from the Catholic University of America with an M.S.B. degree in Business. Sister Anita was an Educator and business manager in New Jersey. She served as a teacher at St. Rose of Lima School, Newark; St. Peter High School, New Brunswick; the College of Saint Elizabeth, Convent Station, as a teacher and Business Administrator from 1971 to 1980; as Associate Professor and Chairperson of the Business Department; Academic Advisor for the Weekend College and Assistant Director of the Adult Undergraduate Program. She then served as Manager of Health Care at the Generalate, Convent Station. Ingenious and resourceful, in 1998, Sister Anita creatively designed "No Wrap Gift Wrap" for which she was awarded a United States Patent (No. 5788067) which is still available today. One of six children, "Sister", as she was called, was all about family and relationships. She cared for ill siblings and other family members with gentleness and great kindness. She enjoyed eating ice cream, dinners at the local diner, and enjoying the company of friends. Always smiling and gracious, Sister Anita was ready with an "I love you" for all. She is survived by the Sisters of Charity; her many nieces, nephews, grandnieces, grandnephews, cousins and a host of extended family and close friends. In lieu of flowers, tributes in her memory may be sent to the Sisters of Charity Development Office, P.O. Box 476, Convent Station, New Jersey 07961.