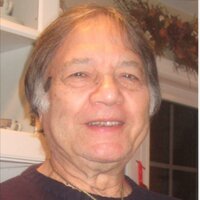 On February 10, our dad, Robert R. Batitto passed away peacefully at the age of 90. Born and raised in his beloved Newark, NJ, he moved to Montville and spent his life teaching in Livingston and then moved to VA for his retirement. He was predeceased by his wife and our mom Janice by six months and now "bun" and "bunny" of 68 years of marriage will be together again. Our Dad fondly recalled his days growing up in Newark, NJ, in the First Ward, an Italian neighborhood. His life there was shaped by the people he met, the culture and the food he longed for to his last day. Dad met my mom when they were very young. He was sweeping the floor at our grandmother's beauty shop, their eyes met and he was smitten. He went to the Navy and came back to marry his high school sweetheart. In 1958, Dad was the first in the family to go to college on a G I Bill. He pursued a teaching degree in art at Montclair State University and did his student teaching at Livingston High School where he would spend the next 38 years. To say Dad had an impact would be an understatement. His accomplishments were endless starting with teaching and making his own art, drawing portraits for staff and friends, creating music, erecting stage sets, coaching football, and counseling. No wonder his colleagues and students described him as a "Livingston Legend." Dad was the embodiment of passion. It guided every aspect of his living. He was passionate in his love of family and friends, passionate in his teaching, and passionate for politics, sports and food. On Facebook, Dad was both legendary and notorious for his political discourse and rants. Oh yes, rants! And he had a love for food, as demonstrated through his cooking and his inventive recipes. Some of his favorite haunts were Dickie Dee's, Tingalings. Everyone has a story about Dad. His impact on the lives of those around him is immeasurable. One glance at his Facebook page is a testament to a life well-lived. While our family is saddened by his loss, we are choosing not only to honor him but also honor his zest for life, in the same way we honored our mom. We invite you to celebrate his life on Thursday February 17 from 5-8 pm at Stephen J. Priola Parsippany Funeral Service, 60 N Beverwyck Rd, Lake Hiawatha, NJ 07034. Committal services will be on Saturday February 19th at 10:00 am at Gate of Heaven Chapel Mausoleum located at 225 Ridgedale Ave, East Hanover, NJ 07936,. (The chapel is in the building on the far right closet to Ridgedale Avenue.) Repast will follow at La Cucina, 278 Diamond Spring Rd, Denville, NJ 07834. Donations can be made to The Arc by visiting https://donate.thearc.org/give. Dad is predeceased by his beloved Janice and his brothers Kenneth and Donald. He leaves behind his brother David; his children: Joseph Batitto and his wife, Kathy; Gina Kohler and her husband Mark; Steven and his wife Michele; Laurie Bisconti and her husband Joe; and Barbara Batitto. He is also survived by his grandchildren Anthony Batitto and his partner Rebel, Pearson Batitto, Justin Hoffman, Sofie Clark and her husband Bryan, Emily Kohler and her boyfriend Marquis, Stephen Theriault, Melissa Batitto, Ashley Batitto, Jordan Batitto, and Bobby Batitto and his great grandsons: Liam Hoffman and Cole Clark.