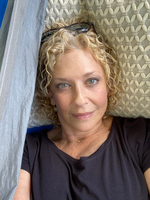 Maureen Elizabeth Rauchberg (née Raimist), a social media specialist of Randolph, New Jersey, died on May 26, 2022, after complications from an 11 year battle with metastatic non-smoking small cell lung cancer. Born in Yonkers, NY, on October 20, 1964, Maureen was raised in Gaithersburg, Maryland and graduated from Gaithersburg High School. She attended the Merrill School of Journalism at the University of Maryland, College Park and was a proud Terrapin. Maureen met her husband, Dr. Alan Rauchberg, during her senior year at Maryland, whom she later married in 1993. Though she lived in New Jersey for over 25 years, Maureen kept her beloved home state close to her heart. Maureen's magnetic personality and ability to connect with the people around her led her to pursue communications, marketing, and outreach work. She worked as a social media specialist for Rauchberg Dental Group, her husband's multi-specialty dental practice in Parsippany. In addition, Maureen formerly served as the social media officer for the American Academy of Dental Practice. A gifted chef and baker, Maureen wrote her food blog, Spatula and Wisk, where she shared her latest recipes, family treats, and the stories behind them. She was a dedicated advocate for lung cancer survivors. Maureen shared her story to support others with lung cancer, including fellow patients at the John Theurer Cancer Center at Hackensack University Medical Center. She was an invited contributor to the Foundation for Lung Cancer's Survivor Spotlight. Maureen was a devoted mother to her three children. She was often found on a soccer field sideline cheering on her sons or helping her daughter prepare for speech tournaments. She loved hosting dinners for her friends and family, interior design, and travelling the world. She is survived by her husband, Alan, a dentist, also of Randolph, and her three children: Jess, of Hamilton, Ontario, Jake, of Atlanta, and Cameron, of Randolph. She is also remembered by her sister, Pearl Rathman, of Royersford, Pennsylvania, aunt Judi Lichtine, of Voorhees, New Jersey, and cousin Elysia Lichtine of Philadelphia. She is preceded by her parents, Anne Armstrong and Lewis Raimist, and her beloved uncle, Saul Lichtine. A shiva for friends and family will be held at the family's home on Sunday and Monday from 2-5pm. In lieu of flowers, donations can be made to the John Theurer Cancer Center's Brain and Spine Research Institute (care of Dr. Samuel Goldlust) or Thoracic Oncology Division (care of Dr. Harry Harper) (https://hackensackmeridianhealth.org) and José Andrés's World Central Kitchen (https://wck.org).