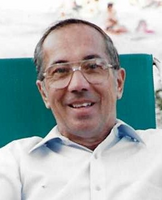 Born and raised in Hamilton, Bermuda, he immigrated the United States and had lived in Ridgewood, NY, before coming to the Lake Hiawatha section of Parsippany-Troy Hills, NJ 54 years ago.

Mr. Mack served in the United States Army during peacetime and was honorably discharged.

He was a machinist with the Curtiss Wright Company of Fairfield for many years, retiring 23 years ago.

Mr. Mack was a former member of the American Legion, Post # 249 of Lake Hiawatha.

Survivors include his loving wife of 62 years, Edith A. (nee Eckes) Mack; two beloved sons, David L. Mack and his wife, Judy of Rutherford, NJ, and Brian J. Mack and his wife, Lorie of Morristown; and three cherished grandchildren, Christopher, Sarina, and Desirae Mack. Melvin was preceded in death by his brother, Rudolph Mack.