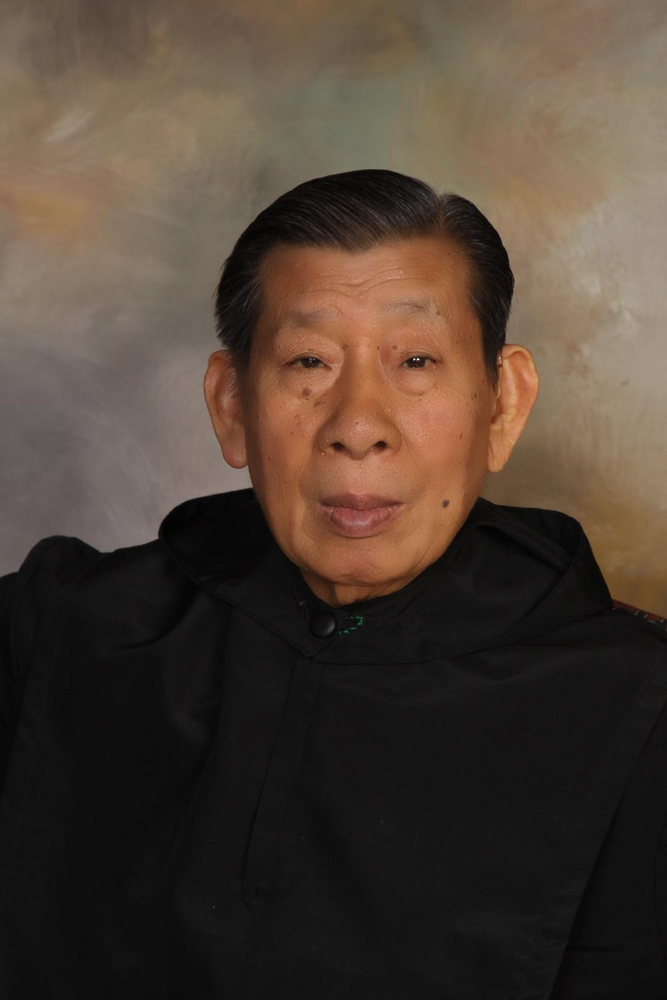 Please share a memory of BROTHER TARCISUS HOA to include in a keepsake book for family and friends.
View Tribute Book
Br. Tarcisius was the middle child of seven siblings. Born December 7, 1930 at Thanh Bo, Vietnam, the eve of the Immaculate Conception of the Blessed Virgin Mary, to whom he would be especially devoted throughout his life. From his earliest years he would sail the family's produce on the river 15 miles to the markets to support the family financially. This taxing work built up physically young Hoa. He became a very strong young man from this routine. Yet he remained a gentle presence in the family. He cherished his familial bonds throughout his life and spent his vacations helping his extended family with house chores and various projects that drew on his many skills. He entered the Benedictine Abbey of Thien An (the name meaning heavenly peace) at the young age of 15. When he completed his schooling, he professed his first monastic vows on June 7, 1951. The Abbey of Thien An drew heavily on Br. Tarcisius' farming, gardening, and carpentry skills. But he was forced to leave his Abbey and his homeland caught in the midst of the war at the fall of Saigon in 1975. He made his way from Guam to the military base at Indiantown Gap, Pa. When our own beloved Abbot Brian Clarke learned that there was a Vietnamese refugee monk in the nearby Keystone State, he happily welcomed Br. Tarcisius to St. Mary's Abbey, as did all the monks of this monastery where he was able to resume his monastic life in peace. Br. Tarcisius worked tirelessly in our garden and orchard, as well as maintaining our abbey church for over 40 years. All were inspired by his indefatigable work ethic. In his spare time, he would make some of the most colorful decorations this monastery has ever seen. While he was not engaged in the school apostolate, nearly every Delbarton student knew Br. Tarcisius as the one who left apples for the athletic teams to enjoy in the fall. Anyone who entered this monastery in the past four decades, worked side-by-side with Br. Tarcisius in the garden and orchard, and in making cider. In the Acts of the Apostles we read that young men see visions….old men dream dreams. The apostle Paul teaches that in Christ there is no East or West (Galatians), for we are all one in Christ! In the middle of the last century a young man from the East in North Vietnam dreamed a dream, and that very same dream was shared by a young man in the West in the middle of the 5th century in Rome. Both of their worlds were breaking apart by circumstances beyond their control. In each case an answer was to be found in the Gospel of Jesus Christ, and by living in a monastery with a little rule for beginners as the daily guide and roadmap for the journey. Blessed are those persecuted for the faith, for theirs is the kingdom of heaven, Jesus says in the Sermon on the Mount. Br. Tarcisius lived his early monastic life in the suffering Church of Vietnam. The Abbey of Thien An continues to bear the scars of persecution to this day. Br. Tarcisius reminded us that whatever suffering or sorrows we may bear, the end is the desire to encounter the Holy One. For Br. Tarcisius, Ora et Labora (our daily life of prayer & work) was the focus of his pilgrimage. This was not just a forced migration in war but rather the pursuit of a young man's desire to live out his vowed life as a loyal son of St. Benedict: A pilgrimage that would take him thousands of miles to find its peaceful end here on this holy mountain in Morristown. Those of us who lived with him since 1975 affirm that this humble and meek monk never missed the Divine Office or Mass in this abbey church, until sickness ravaged his tired body. But he prayed ceaselessly from his infirmary bed. Br. Tarcisius is survived by his brother, Peter, and his sister, Lien in Vietnam, his nieces and nephews, who visited him regularly. His niece, Anne Hoang Lavelle, remained at his side till the end. She visited weekly, spending the day singing, praying, and teaching him to use the iPad to follow the Mass and devotions to Our Lady of La Vang. May the Blessed Virgin Mary, to whom this monastery is dedicated, the Mother of Sorrows, the Gate of Heaven and the Perpetual Help of Christians, accompany our dear Br. Tarcisius to the throne of mercy where we pray he will see God face to face, and sing with the choirs of angels at that banquet prepared for each one of us from the foundation of the world! Br. Tarcisius' body was received at the abbey church on Thursday afternoon, March 24. The Office of the Dead was sung later that evening. The Funeral Mass and interment in the abbey cemetery were celebrated Saturday, March 26, live-streamed for the benefit of Br. Tarcisius' family, friends and confreres in Vietnam. Br. Tarcisius' Funeral Mass was attended by hundreds of family and friends, with a visiting choir singing gloriously in Vietnamese! The homily was translated into Vietnamese. Vietnamese food was served at the repast. All this was a first for St. Mary's Abbey, and a reminder of the wonderful universality of the Church. Donations in Br. Tarcisius' memory to support abbey capital improvements, health care of the monks or abbey endowment may be made using the link: https://www.saintmarysabbey.org/support-us. Prior Edward Seton and the monks of St. Mary's Abbey request the customary suffrages for our confrere, Br. Tarcisius. »(Do not delete this line. It does not print. Text that is to appear on web must be entered before this line)
To send flowers to the family or plant a tree in memory of BROTHER TARCISUS HOA HOANG, please visit Tribute Store
Friday
25
March

Share Your Memory of
BROTHER TARCISUS HOA
Upload Your Memory View All Memories
Be the first to upload a memory!
Share A Memory
Send Flowers
Plant a Tree