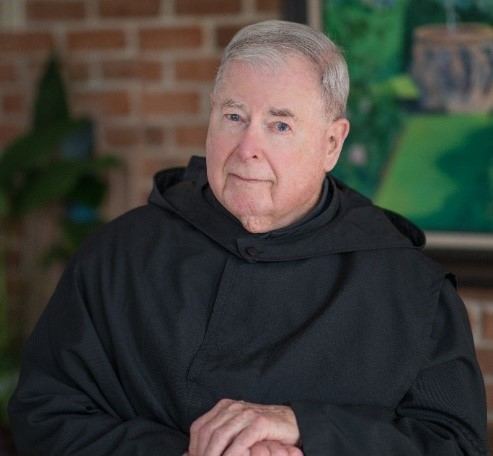 Please share a memory of Fr. Beatus to include in a keepsake book for family and friends.
View Tribute Book

Fr. Beatus Timothy Lucey, OSB returned home to the Lord on the morning of December 3, 2022 in the Abbey Health Care Center. Fr. Beatus was born in Philadelphia on January 5, 1933 into a close-knit, Irish-American family. He was the son of John D. and Eleanor Gallagher Lucey. He joined his older brother, Jack, and was followed by two sisters, Eleanor and Mary Ann. After graduating from St. Joseph's Prep in Philadelphia, Timothy Lucey applied for admission to St. Mary's Monastery, Morristown. As was the custom, he did two years of minor seminary at St. Vincent College, Latrobe, Pennsylvania. After St. Vincent, Frater Beatus was sent to St. Benedict's Abbey, Atchison, Kansas for his novitiate. Upon completion of his novitiate, Beatus professed simple vows, July 11, 1953, and returned to Morristown to begin his theological studies at the St. Mary's Abbey School of Theology. Upon successful completion of his studies, he was ordained a priest, May 23, 1959. He then began his long career of teaching and priestly ministry.

Fr. Beatus spent almost all of his monastic life in Morristown, a place he loved and cherished. Even before ordination, Frater Beatus, like most of the monks of his generation, was involved in the life and work of Delbarton School where he taught English. Over his long career at Delbarton, Fr. Beatus filled various roles in the school - teacher, prefect, moderator and eventually headmaster, from 1990 until 1995. However, it is perhaps as the founding father, as it were, of the Art Department, that Fr. Beatus leaves his greatest legacy to Delbarton.

Starting with a small space in the back of Old Main and a lone faculty member, Fr. Beatus gave shape to a nascent art curriculum, which grew substantially and is now housed in the Delbarton's Fine Arts Center. In both the school and the monastery, Fr. Beatus' artistic flair was often in evidence, whether it was a piece of calligraphy, a floral arrangement, a set for a play or a banner flying in front of Trinity Hall.

Throughout his life, Fr. Beatus championed the importance of beauty in everyday life. He selected almost all of the artwork that graced the 'new' monastery and abbey church when they opened in 1966. Almost until the end of his life, he assisted in adorning the abbey church with plants and flowers. The visual arts, however, were not the only form of beauty that Beatus appreciated. He loved music and the Saturday concert from the Metropolitan Opera could often be heard wafting from his room. He delighted in the written and spoken word and he was a voracious reader. One of his greatest pleasures was reading the New York Review of Books from cover to cover. He read widely, a fact that made him a great conversationalist and a popular dinner guest.

In addition to teaching art, Fr. Beatus was an accomplished artist in his own right. Having obtained an M.F.A. from the Catholic University of America, he initially worked in many genres. Over time, however, he focused more on watercolors and he continued to paint until arthritis no longer made it possible. In his artwork, one often sees his two of his great loves combine - nature and architecture. He had a keen eye for the flora of any environment in which he found himself. No doubt, he owed this to the influence of his beloved Aunt Peg, herself a master gardener. While he was still able, he helped tend to several gardens in the abbey's precincts. When infirmity slowed him down, he dedicated himself to caring for houseplants inside the monastery.

As both teacher and student of art history, he had a great interest in architecture, with a particular fondness of Renaissance and Baroque architecture. One of the high points of his life was a year-long sabbatical in Florence, Italy, during which he fully immersed himself in the splendors of Italian art and architecture. For many years he served on the Art and Architecture Committee for the Diocese of Paterson.

Fr. Beatus was a dedicated monk and priest. For most of his monastic life, Beatus ministered to the people of God both at the monastery, and in local parishes and convents. For over a decade, he served as the chaplain to the Sisters of Charity of Convent Station. His reverence for and in the liturgy was always clearly visible. He was especially conscientious about preparing his homilies and his preaching of the Word showed that.

One of his last external works was leading a Bible study group at a local parish. They would meet on Friday morning and reflect on the readings for the coming Sunday. A note from one of the participants reveals the impact he had. "You cleared our minds and opened our hearts at the beginning of each session with your well-directed prayers. The readings for the coming Sunday could then be digested, absorbed and prayed. This gave the Holy Spirit an opportunity to expand my sense of God's love." Until quite recently, he continued to preach to the small group of monks in our infirmary.

He served the community as prior under Abbot Brian Clarke and, as a confrere, he demonstrated a fierce love for the monastic way of life. Even as the burden of age and infirmity took its course, Fr. Beatus continued to give faithful witness by his presence at community prayer and activities.

Declining health, however, took its inevitable toll; and, over the last few years, Fr. Beatus moved first into an assisted living suite and then finally into the abbey's infirmary. In his last months, Fr. Beatus was confined to bed, which definitely cramped his style. Still, with the loving care of the nursing staff and his confreres he bore his illness patiently. He welcomed visits from family and friends right until he heard the Lord call to him, "Well done, good and faithful servant."

Fr. Beatus' body will be received at the abbey church on Sunday, December 11 at 3 p.m. Vespers of the Dead will be sung at 4 p.m. The Funeral Mass and interment in the abbey cemetery will be celebrated Monday, December 12 at 3 p.m. Those unable to attend may view the liturgy via livestream on the abbey's YouTube account. Donations in Fr. Beatus' memory to support abbey capital improvements, health care of the monks or abbey endowment may be made using the link: https://www.saintmarysabbey.org/support-us.

Abbot Jonathan Licari and the monks of St. Mary's Abbey request the customary suffrages for our confrere, Fr. Beatus.

To send flowers to the family or plant a tree in memory of Fr. Beatus Lucey O.S.B., please visit Tribute Store
Sunday
11
December

Reception of the Body

Share Your Memory of
Fr. Beatus
Upload Your Memory View All Memories
Be the first to upload a memory!
Share A Memory
Send Flowers
Plant a Tree